How does skin heal itself?

How does skin heal itself?

The minute that you get a cut your body gets to work to start healing the wound. The first thing your body does is to limit the blood loss by decreasing the amount of blood flowing to the area of the wound. The proteins in the blood together with blood platelets and plasma work together to form a protective layer which is called a scab. The scab protects the wound from outside infections while your skin is being regenerated underneath the scab. 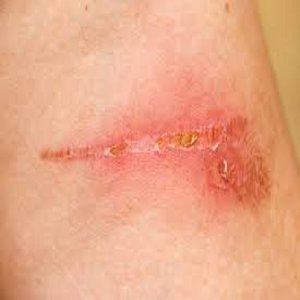 If only the outer epidermis layer has been cut, the chances of a scar appearing are less to nothing. If the cut penetrated deeper into the dermis of your skin, then the cicatrisation (closing of the would through scar formation) begins as your body starts to create fibrous scar tissue from the granular tissue. In short, the deeper the cut the more likely it is that a scar will develop.

The time period for your body to bridge a deep cut is anywhere between three to six weeks. The body does this by producing a protein called collagen at the area of the wound to repair it. It can take up to two years for the scar to settle into its permanent appearance. It should be noted that the appearance of scars of 2 years old or older can also be very effectively treated with silcone gel to reduce the appearance of the scar.

Scar tissue is very different from normal skin tissue in that it does not have sweat glands and it does not have hair growing from it. Scar tissue is also more sensitive to ultraviolet rays. The appearance of most scars are white and the scar lies flat against the surface of your skin. There are other scars called Hypertrophic or Keloid scars that take on an odd appearance. Hypertrophic scars are raised at the wound area and they are reddish in colour and could be itchy. These types of scars are very effectively treated wil silicone gel strips. Keloid scars appearance are also red in colour and are also raised but well over the area of the wound, onto healthy skin tissue. It is not yet known what causes these abnormal scars, but one theory is that the signals sent by the cells to the wound site have been changed. It seems that even after the wound has been healed the cells keep sending signals to the body to produce more fibrous tissue to be sent to the wound area. 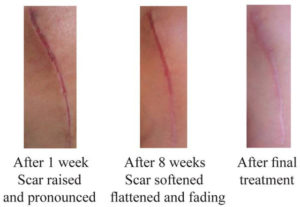